Selling Tradelines: Can You Make Money and Is It Safe? 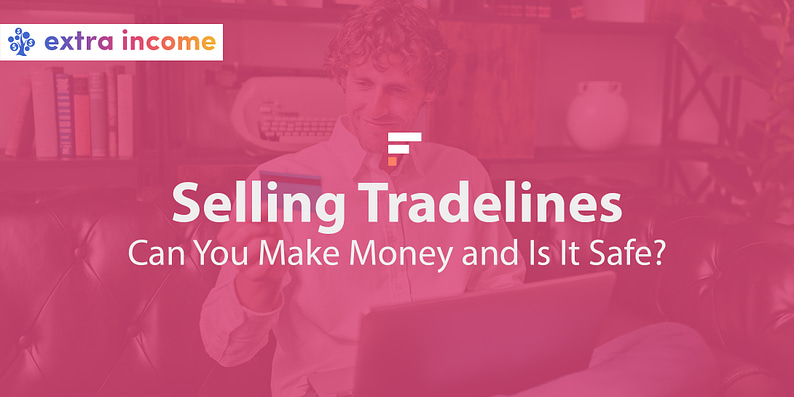 You risk being scammed or linked to criminal activity. You can also hurt your credit score if one of your accounts ends up being closed. The legality, both for the buyer and the seller, is also questionable. We’ll take you through the risks and benefits of selling tradelines.

The tradeline includes information about the debt or line of credit, as well as the type of the account, lender’s name, the date the account was opened, monthly and current balance, payment history, and a partial account number, like the last 4 digits of your credit card.

Why Buy and Sell Tradelines?

Credit bureaus use tradelines to calculate your credit score. A credit card tradeline that uses a low percentage of its credit limit and is consistently paid on time will boost your credit score: the older the tradeline, the greater the credit boost.

Someone with a good credit score can add an authorized user to increase the new user’s credit score. Many users add a young adult child or spouse to a credit card to boost their credit score. This is where the concept of selling tradelines originated.

Now, instead of adding a child or spouse, you can sell the opportunity to use your good credit to a stranger. They might be applying for a mortgage or a loan, and the increased line of credit and associated credit boost could save them thousands of dollars through more favorable terms or a lower interest rate.

📘 Learn more about how tradelines work and the pros & cons of buying tradelines.

How to Sell Tradelines?

The easiest way to sell tradelines is through a brokerage service. Companies like Tradeline Supply, BoostCredit101, and Tradeline.Club specialize in buying and selling tradelines for a fee.

Selling tradelines means adding an authorized user to your credit card for a set fee. The user will usually stay on your account for about two months, after which you will be told when you can remove the authorized user.

The price you receive for selling tradelines is based on your total credit score, the age of the card, and its credit limit. Some banks or credit card issuers are also considered more favorable for their reporting practices and will command a higher price.

👉 How selling tradelines works in 5 steps:

How Much Can You Earn From Selling Tradelines?

The amount of money companies claim you can earn from selling tradelines varies greatly. It goes from $50 to $350 per authorized user per month.

Exactly how much you can earn from selling tradelines will depend on four different factors taken together:

Selling tradelines is not technically illegal, as of early 2021. Legally, as a credit card holder, you can add anyone to your credit card. Accepting payments for adding someone as an authorized user is also legal.

However, it is frowned upon by both banks and credit bureaus. Those buying the tradelines can be seen as deceiving the lender or even committing bank fraud. When selling tradelines, you risk violating your credit card terms of service. This can lead to your account being shut down, which can affect your own credit score.

Selling Tradelines: Can You Make Money and Is It Safe?
Click To Tweet
⚠️ For most people, the combined risks of selling tradelines outweigh the benefits. If your credit score is good enough to be useful in selling tradelines, you’re already handling your finances well. Why would you risk that for a little extra money?

💡 Look into other, safer ways of making extra money.

If you do decide to sell tradelines, you can protect your identity and prevent unauthorized transactions by requesting that the new card for the new authorized user be sent to your address. Set up two-step verification with your bank to prevent the new user from requesting a card directly with the bank.

While this will prevent the tradeline buyer from making charges on your account it will not alleviate other risks.

Do you have any questions about selling tradelines? Let us know in the comments section below!

Alison Kimberly is a freelance content writer with a Sustainable MBA, uniquely qualified to help individuals and businesses achieve the triple bottom line of environmental, social, and financial profitability. She has been writing for various non-profit organizations for 15+ years, and has expertise in real estate investment. She is passionate about helping individuals achieve personal and financial freedom.