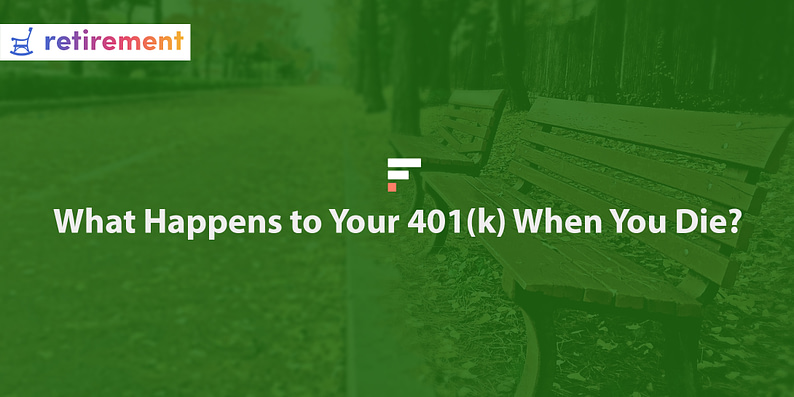 With pensions now a rarity in the private sector and Social Security diminished, 401(k)s are the backbone of many American retirement plans. That means workers have to take responsibility for building their own retirement funds.

While many worry about not saving enough, the opposite happens surprisingly often. 27% of Americans with a college-educated parent received an inheritance in 2019, with a median value of $92,700[1]. That’s a lot of people with significant savings left over when they pass away.

That raises an important question: what happens to your 401(k) when you die? Who gets the money, when, and how? This guide will give you the information you need to prepare for and manage 401(k) inheritance transactions properly, whether you’re the original owner or the beneficiary.

When you die, your 401(k) goes to the designated beneficiary of the account. If you have a living spouse at the time of your death, they’ll be the default beneficiary by law.

For you to pass your retirement account to a non-spousal beneficiary, your partner will typically have to waive their rights to the benefits.

Otherwise, even if you named another person on your beneficiary forms (say, when you opened the account), your spouse will still be entitled to the money.

If you’re unmarried or have no living spouse at the time of your death, you can elect to leave the funds to whomever you wish. That can include multiple people, in which case you can split the proceeds at your discretion.

There are two priority levels for beneficiaries:

👉 Let’s take a look at an example.

John names his wife and young son as the primary beneficiaries of his 401(k). His wife signs a waiver agreeing to the split, allowing the son to get half. John then names his nephew as a contingent beneficiary.

If John were to pass away first, his wife and son would split the balance in the account. If John were to outlive his wife, his entire remaining 401(k) balance would go to his son upon his death.

Only if John, his wife, and his son all pass away would his nephew get any money. If that happened, he’d get all of it.

Probate is a legal process during which a court validates your will, and its executor ensures your estate goes to the designated parties. If you die without a will, the probate court will assign someone to handle your estate (usually a close relative).

☝️ You should avoid letting your assets go through probate upon your death when possible. The process can delay the transfer by months or more and deplete the value of your estate.

The executor has to register paperwork demonstrating your death, get the courts to approve the will, take control of your accounts, and then distribute the assets, which can drag on for a long time.

In addition, the executor usually uses the estate to pay for legal costs and will have to pay off your creditors if you had outstanding debts upon passing.

Creditors can’t normally pursue your 401(k) (unless they’re the IRS), but all bets are off if it’s part of your estate during probate.

Fortunately, naming a beneficiary on a retirement account keeps it separate from the rest of your estate and allows for a simple transfer upon your death.

You have to name a beneficiary when you open your 401(k), so it typically won’t have to go through probate unless:

💡 Because of this, you should update your named beneficiaries after any life events that may impact who you want to receive your funds, like getting married, having children, going through a divorce, or a beneficiary passing away.

As if death weren’t inconvenient enough, it can present some pesky tax issues. While there are typically few problems for the deceased, beneficiaries often have to do a lot of planning to navigate account transfers successfully.

I’ll go into further detail later when I talk about the specific transfer options for 401(k)s, but here are some general guidelines.

Beneficiaries of a 401(k) use the same tax treatment for distributions as the original owner. That means if the account was traditional (funded with pre-tax dollars), the beneficiary’s withdrawals or distributions are generally taxable.

If it was a Roth 401(k) and funded with post-tax money, any distributions will not be taxable.

📗 Learn More: Do you understand the difference between Roth and traditional retirement accounts? Take a deep dive into the topic here: Roth vs. Traditional: What’s the Difference?

The IRS rarely misses an opportunity to tax you, and death is sadly no exception. There is such a thing as a death tax, though people usually refer to it as the estate tax.

If you have enough left in your 401(k) when you die to trigger estate taxes, you’ll pay between 18% and 40% to the federal government on the amount above your exemption.

👍 Fortunately, the threshold to qualify for estate taxes is surprisingly high. In 2021, there’s a lifetime exemption of $11.7 million for all gift transfers. That includes your estate.

That’s why most people don’t have to worry about this too much. However, your exemption will be lower if you gave gifts above the annual $15,000 per person threshold during your lifetime.

When you die, the IRS generally requires plan administrators to transfer your 401(k) to the proper beneficiaries no later than the end of the following year.

However, as you probably know, 401(k)s have rules that limit access to the funds inside them. They’re retirement accounts, after all, so they’re designed to prevent people from taking the funds out before retirement.

Unfortunately, these limitations don’t necessarily disappear when the original account holder passes away. There are still restrictions on how the beneficiaries can receive the funds. That can complicate matters.

The inheritance of a 401(k)  is usually smoothest when it’s between spouses. There are three ways for surviving spouses to receive the funds.

Spouses can elect to leave the 401(k) in the original owner’s name. They can then access the funds without the 10% early-withdrawal penalty, even if neither spouse was age 59 ½.

If they choose this option, they have to take required minimum distributions (RMDs) on the original owner’s schedule, which starts when they would’ve turned 72.

⚠️ Important Note: Calculating required minimum distributions and dynamically adjusting your tax planning accordingly is a complex and delicate matter. The IRS will impose a whopping 50% penalty on any balance remaining in a retirement account that shouldn’t be there, so you should strongly consider talking to a tax professional for help with RMDs.

Spouses can elect to close the inherited 401(k) and roll the proceeds into their own 401(k) or IRA. There are two general account options:

Rolling the funds into one type or the other depends on both spouses’ ages, incomes, balances, and plans for the future. Again, consider consulting a tax professional before choosing one.

Spouses can elect to take distributions from an inherited 401(k) without rolling it into another tax-advantaged account. These distributions will not be subject to the 10% early withdrawal penalty.

The distributions can occur in a single lump-sum or periodically, but a single lump sum can potentially create a massive tax bill since it can push the recipient into higher tax brackets.

If the spousal beneficiary chooses periodic distributions, they can elect to receive them over their single life expectancy or the next ten years.

⚠️ Keep in mind that while these are the legal options put forth by the IRS, the terms of an individual 401(k) might require one or the other. Make sure you check the rules that apply to your account or the one you’re inheriting.

Thanks to the recent passage of the SECURE Act, there are a lot fewer options available to non-spousal beneficiaries. In some ways, that makes it simpler for them to inherit a 401(k), though it usually costs more in taxes.

Non-spousal beneficiaries have a ten-year window to take distributions equal to the amount of the account balance. By taking distributions in fewer tax years, inheritors will likely reach higher tax brackets and miss out on years of deferred growth.

There are exceptions to the ten-year requirement if the non-spousal beneficiary qualifies as an “eligible designated beneficiary.” These include the following:

These eligible designated beneficiaries can take distributions over their single life expectancy, much like a spousal beneficiary.

Consider Talking to an Estate Planner

As you can see, estate planning can get extremely technical. The information above is just an introduction to what happens to your 401(k) when you die.

Finding the best tax strategy for an inherited 401(k) is a deeply involved process, and the cost of mistakes is high. One slip-up could mean leaving your life savings to your ex-spouse or mishandling an inheritance, and losing thousands in unnecessary taxes.

If you have a sizeable 401(k), if you have recently inherited one, or if you expect to inherit one, it’s a good idea to talk to an estate planner or tax expert to help you make sure you handle your next steps correctly.

📕 Further Reading: Are you trying to decide whether a 401(k) or an IRA works best for your retirement plans? Take a look at our comparison of the two: 401(k) vs. IRA: The Best Type For You

Do you have any additional questions about what happens to your 401(k) when you die? Let us know in the comments section below!