Roth or Traditional Retirement Accounts: Why Not Both? 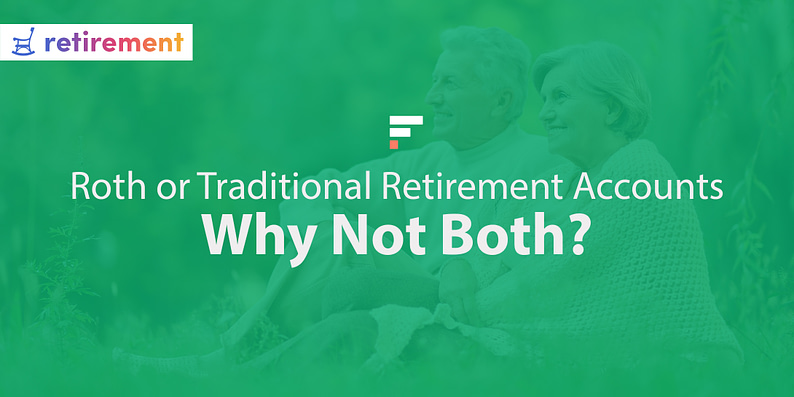 Are you struggling to decide whether to contribute to Roth or traditional retirement accounts? Traditional options are the most popular choice, but the gap between the two is closing. In a recent survey, 39% of respondents preferred traditional IRAs, while 36% opted to invest in Roths[1].

In truth, it’s probably a mistake to use either one exclusively. If you’re like most people, you’re going to be putting money into your retirement accounts for decades. Different options will make sense at various stages of your career, and you’re probably going to want to have access to both when you retire. Here’s why that is.

Roth vs. Traditional: What’s the Difference?

If you earn $60,000 a year and contribute $6,000 to a traditional IRA, you could take that contribution as a deduction and save $1,320 upfront. But when you take the money out, you’d have to pay ordinary income tax on the distributions.

If you put that same amount into a Roth IRA, you’d get no deduction for it. Your taxable income would remain unchanged. In return, you’d never have to pay taxes on that cash or its earnings again.

Why It Makes Sense to Invest in Both

People have a bad habit of seeing their options as black and white. We vote Republican or Democrat, drink coffee or tea, and love cats or dogs. But that tends to backfire more often than not. It’s definitely something to avoid when choosing between Roth and traditional retirement accounts.

In this case, permanently picking one over the other is like deciding that turning left is better than turning right. You’ll get to your destination much faster if you take advantage of both options.

Let’s take a look at why it makes more sense not to limit yourself.

The primary reason to contribute to either Roth or traditional retirement accounts is to take the tax deduction when your marginal tax rates are highest. Your working career will probably last for decades, so you’ll have to constantly reassess how your rates compare to what you expect to pay in retirement.

People usually enter the workforce in their early twenties and retire somewhere around their sixties. Most people earn more toward the end of their careers. Because America’s income tax system is progressive, raising your earnings will also raise your marginal tax rates.

👉 Here’s an example to show you how this impacts the decision to contribute to Roth or traditional retirement accounts:

If you started working in 2020 making $40,000 a year, your marginal tax rate would be 12%. Contributing to a Roth account would make the most sense at this point. It’s unlikely that your tax rates would be any lower in retirement. You’d already be in the second-lowest tax bracket, which is only 2% higher than the one below it.

After ten years of 5% annual raises, your salary would be roughly $65,000. Assuming that tax brackets didn’t change, your marginal tax rate would then be 22%. It would make more sense to contribute to a traditional account at this point. You’d be unlikely to reach the same income or tax bracket in retirement.

So far, it seems like the best choice would be to contribute to Roth accounts until your income exceeds what you plan to need in retirement. At that point, you could switch to traditional retirement accounts to maximize your deductions.

Unfortunately, it’s not that simple. In reality, it’s difficult to know for sure what you’ll need to support yourself in retirement. You might be able to live happily off $30,000 a year when you’re 25, but you’ll probably need more when you’re 65. Just how much more you’ll need is impossible to predict. Lifestyle inflation and potential health complications will both have an unknowable impact on your future budget.

👉 Looking for ways to live a cheaper lifestyle in retirement? Check out some of our best ideas: 11 Easy Money-Saving Tips for Seniors

Even if you knew exactly how much income you’d need to afford your future lifestyle, it’s unlikely that overall tax brackets would remain the same. Without knowing how they’ll change, you have no idea whether you’d be better off with the deduction while working or in retirement.

And if anything, it’s likely that tax rates will trend up, given the federal government’s overspending problem. Falling into a lower tax bracket personally while overall rates go up would produce an unknowable net effect. Most current proposals for raising taxes focus on the higher brackets and would have little impact on less wealthy workers, but that trend could also change.

The bottom line is that it’s impossible to know with absolute certainty when you’ll benefit most from Roth or traditional retirement accounts. You can make educated guesses, but contributing to both is the best way to hedge your bets.

Having Both Lets You Leverage Asset Location

Having both types of retirement accounts also helps you diversify your investment holdings. Diversification is one of the fundamental principles of smart investing: it’s always safer to put your eggs in multiple baskets, rather than just one. People usually take that to mean that you should invest in multiple asset classes, but it also means you should split your investments between multiple types of accounts.

Diversifying your account types intelligently is also known as optimizing your “asset location.” With both Roth and traditional retirement accounts, you can put asset classes in accounts that get the most efficient tax treatments for their attributes.

It’s usually better to put stocks in Roth accounts. Stocks are volatile, but they provide much larger returns than bonds, on average. Growth is much more tax-efficient in a Roth account than a traditional account since you won’t have to pay taxes on it.

Having multiple asset locations also allows you to smooth out your income levels.

Imagine that you retired in 2020 and need $20,000 to support yourself. You could stay in the 10% tax bracket with the standard deduction. Whenever you have unexpected expenses, you could draw on your Roth accounts to keep your taxable income from rising into higher tax brackets.

Consider a Traditional 401(k) and a Roth IRA

One of the most common ways people split their funds between retirement accounts is by contributing to a traditional 401(k) and a Roth IRA. Roth IRAs allow you to take out your contributions without any penalties and avoid Required Minimum Distributions (RMDs), but Roth 401(k)s don’t. An RMD is a mandatory annual disbursement from your account starting at the age of 70 1/2.

The Roth IRA’s exemption from RMDs can be a real advantage. Lifespans are increasing, and accounts with mandatory disbursements could run out while you’re still alive. Your Roth IRA can remain in reserve (and still earning) for late in your retirement.

💡 If you don’t use it you can pass your IRA (and its tax-free privilege) to your heirs.

While this split works for many people, it’s not going to be viable for everyone. Some people’s employers don’t offer 401(k) plans, and self-employed people can’t access 401(k)s unless they start their own.

In any case, it’s best to consult an expert before committing to Roth or traditional retirement accounts. Retirement planning is extremely nuanced, and it’s always safest to consult with a financial advisor or Certified Public Accountant to figure it all out.

📘 To learn more about the various types of retirement accounts, take a look at our breakdown of the best options: An Introduction to Tax-Advantaged Retirement Accounts

Do you have any questions about retirement accounts? Let us know in the comments section below!