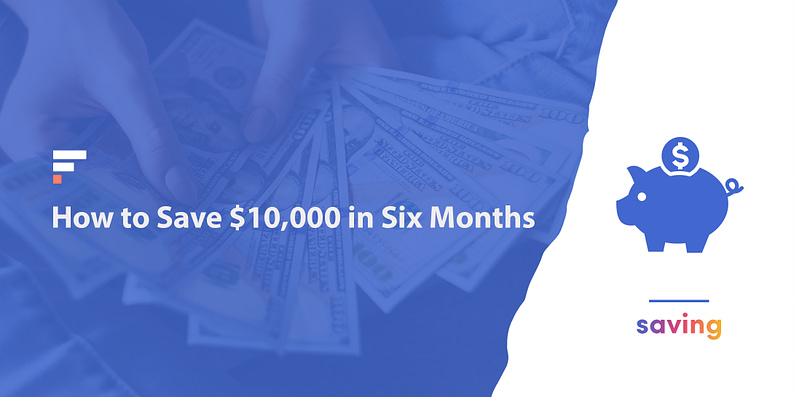 People tend to thrive most when they have identifiable goals. One of the most common goals among those looking to improve their finances is to save a lump sum of money before a given deadline. For example, you may want to figure out how to save $10,000 in six months.

There are three broad ways to achieve a savings goal like that. You can:

Let’s take a look at the numbers behind a few examples to demonstrate how you might go about saving so much so quickly using each strategy.

Save More by Spending a Lot Less

The average American shells out $38,266 every year[1]. That works out to $3,189 per month, with the following amounts going to these categories:

Even on this average American budget, there’s plenty of room for savings.

Imagine that John spends the national average and wants to save his first $10,000 in the next six months.

To lower his housing expense, he gets a roommate who pays for the master bedroom in the apartment. That reduces his lodging and utility expenses by 60%, saving him $731 and $130 per month, respectively.

He also negotiates full-time remote work after COVID-19. Free of his commute, for the time being, he sells his car and gets by using rideshares and his bike. That cuts his transportation costs down to just $40 a month, saving him another $434 per month.

Without a car, he begins to cook at home a lot more, reducing his food costs to $200 a month. That saves him another $188 per month.

Finally, since he’s not going out as much, John picks up more affordable forms of entertainment. He spends less time at bars and more time playing basketball at the gym on the corner. John then realizes he has many fancy outfits that now sit unused, so he stops buying them. He saves a final $101 and $89 a month here, respectively.

There’s only so much you can do to reduce your spending before you compromise your lifestyle beyond what you’re willing to tolerate. For example, maybe you can’t stand having a roommate anymore. I get it. Living alone is an expensive luxury, but who really wants to have a roommate in their 30s?

Fortunately, your earning power has no such limits. If you want to know how to save $10,000 in six months without compromising your lifestyle, making some extra income is your best bet. You’ll have taxes working against you, so you’ll have to earn more than $10,000 to reach your goal.

Imagine that Leslie works as an administrative assistant making $38,000 a year. She wants to save her first $10,000 over the next six months, so she moonlights as a virtual assistant in her evenings and weekends.

She lands two recurring clients who pay her $260 per week each to manage their emails and social media accounts.

➗ Here’s how the math works:

Assuming a marginal tax bracket of 18%, her net profit would be:

📕 Want some practical ways to start making some extra money? Take a look at our favorite suggestions: How to Start Making Extra Income.

Spending less and earning more are effective at rapidly increasing your savings, but chasing quick results with investing is usually a fool’s errand. Compound interest takes a long time to take effect: it’s just the nature of the beast.

So don’t fall for some get-rich-quick scheme that guarantees you $10,000 in six months using some secret investment strategy. It’s all but guaranteed to be a scam.

If you want to generate $10,000 in savings with nothing but your investments, there’s only one reliable way: Have a large enough investment portfolio. With enough savings in income-producing assets, you can generate significant amounts of money quickly and without intolerable risk.

Imagine that Jaime has $285,715 invested in a stock market index fund. Here’s the math on its investment returns over six months:

Of course, high-yield investments like the stock market are volatile, and there’s no guarantee that they’ll generate their average return in any given year. That’s why investing is rarely a safe way to make money in the short term. You may know someone who has earned (or claims to have earned) a fast fortune on meme stocks or cryptocurrencies, but there are very real risks involved in these investments, especially if you’re putting most of your capital in risky investment instruments.

📕 Want to get started with investing? You can’t build serious wealth without it, so take a look at our introduction to the topic: Investing 101: Investing For Beginners.

The Balanced Approach: Use All Three

You’ve doubtless realized by now that trying to save $10,000 in six months using only one of the strategies above would be difficult. Most people are much better off spreading their efforts among all three strategies.

First, Anna cuts back on her nights out. By eating at home and finding other means of entertainment, she eliminates $600 of monthly spending that previously went to late-night burgers, fancy dinners, alcohol, and Uber rides.

Second, Anna needs to earn $250 per week, so she picks up an extra shift every Saturday at the hospital where she’s a nurse. That amounts to $1000 extra income per month.

Because Anna then invests her money in a tax-deferred account, those earnings aren’t subject to taxes. That means she has a total of $1,600 in new monthly savings.

With her starting balance of $20,000 already invested, monthly deposits of $1,600, and an investment return of 7%, her portfolio would generate an additional $856 in interest in six months.

As you can see, saving $10,000 in six months is much easier if you leverage all three strategies. Don’t be afraid to try your hand at each of them.

📕 Tax-deferred accounts are a powerful tool for reducing your tax liability and saving more money. Take a look at the options out there to find which ones might make sense for you: An Introduction to Tax-Advantaged Retirement Accounts.

Investing is a risky way to get rich quickly, but it’s the best way to get rich slowly. Remember, wealth multiplies wealth. It’s easier to save $10,000 in six months when you already have $250,000 saved because your money will do the heavy lifting for you, but it’ll take time to save that much in the first place.

Of course, if you want to spend your money at the end of your six-month journey (or even the next few years), you probably shouldn’t rely on investment returns. You don’t want to risk the possibility of your savings not being there when you need to withdraw them.

For short-term goals, you’d be better off putting your money in something liquid, like a savings account. The money would be safe, but any returns would be negligible. In these cases, focus on earning more and spending less. Let any investment returns you get be icing on the cake.

If you split your efforts between spending less, earning more, and investing wisely, you’ll save much more efficiently.