What Happens If You Don’t File Or Pay Your Taxes? 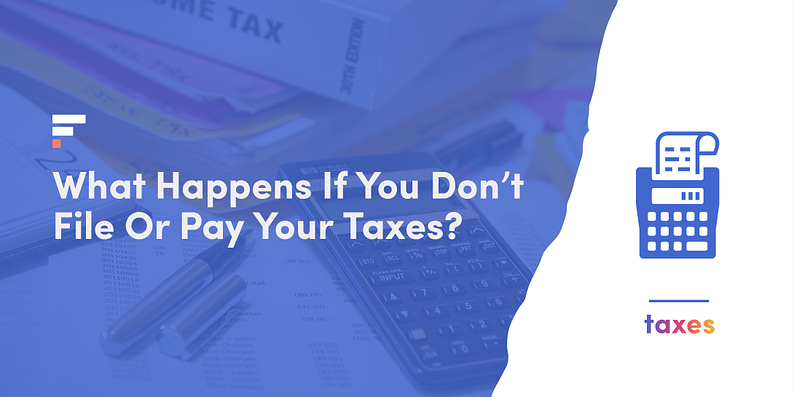 The IRS assessed nearly $33.8 billion in penalties for late 2019 tax returns[1]. If you’re wondering what happens if you don’t file or pay your taxes, the most likely answer is that a hefty bill arrives.

You can minimize the damage if you’re proactive about resolving the issue, but if you make the IRS come after you to collect, don’t expect a happy ending. Here’s what you should know about the consequences of neglecting your tax responsibilities.

It’s easy to mix up the failure to file your tax return with the failure to pay your tax liability. Many people make both mistakes at the same time, and the IRS doesn’t always do a great job of explaining the difference. They are two separate issues, and you should treat them differently. Here’s what you need to know.

What Constitutes a Failure to File?

The IRS requires the overwhelming majority of workers to file a federal tax return each year. Anyone who reaches the following income levels in a year has to go through the process:

The numbers are indexed every year to keep up with inflation. If you meet those income levels but fail to file a return by the deadline, the IRS will penalize you.

Personal income tax returns for each tax year are due by April 15th of the following year. You can send it in the mail as long as it’s postmarked by the due date, but filing online is usually easier. If your income is below $72,000, you can use the IRS’s free online filing service[2]. You can request an extension to get an extra six months to file, but only if you do it before the deadline[3].

⚠The IRS will not extend your deadline to file automatically. You have to ask for an extension, but they won’t deny your request.

What Constitutes a Failure to Pay?

You’ll incur failure-to-pay penalties if there is any unpaid tax liability (no matter how small) after the deadline. How much you have to pay to avoid penalties will vary. It depends on how much money you earned and how much you (or your employer) paid to the IRS during the year.

If you’re an employee, your employer automatically withholds a percentage of your paycheck and uses it to pay the IRS on your behalf throughout the tax year. They’ll give you a W-2 before the deadline that contains the details you need to file. You can use it to calculate whether you will have a balance due or receive a refund for the year. Most employees get a refund, so they are less likely to face failure-to-pay penalties.

If you’re self-employed, you’re responsible for manually sending estimated tax payments to the IRS each quarter. Human error and the inconsistent nature of self-employment earnings make annual tax liabilities much more common. If you owe anything to the IRS after the deadline, they will penalize you for failing to pay it.

Which One Costs More in Penalties and Interest?

If you don’t file or pay your taxes penalties and interest will start immediately. There’s no grace period, and the charges will continue to grow every day until you pay off your balance and fix the situation.

The penalty for failing to file is 5% of the unpaid balance for each month (or part of the month) that the return is late. For example, if you file 35 days late, they’ll consider that two months late. Fortunately, they’ll cap the penalty after five months, when the charges reach 25% of your balance.

If your return is over 60 days late, the minimum failure-to-file penalty is the lesser of $435 (adjusted for inflation) or 100% of the unpaid tax.

The penalty for failing to pay is 0.5% of the unpaid balance for each month or part of the month that payment is late. Ten days after the IRS sends their notice of intent to levy, the rate will increase to 1% per month. If the taxpayer reaches out and agrees on an installment plan, it will go down to 0.25% per month thereafter (as long as they filed on time). It also caps out at 25% of the outstanding balance.

What Happens If You Don’t File or Pay Your Taxes: A Practical Example

That’s a lot to take in, so let’s look at a practical example of what happens if you don’t file or pay your taxes on time.

You’d owe the following in penalties and interest:

As you can see, the penalties for failing to file are much steeper than those for failing to pay. Even if you don’t have the cash to pay your outstanding balance, make sure you file your tax return by the due date. You’ll still pay a penalty, but it will be lower than it would be if you fail to file.

👉 Need some extra income to afford your tax payments? Here are some great ways to get started.

How The IRS Collection Process Works

If you fail to pay or file, the IRS will send you a bill for the amount you owe. It will include an explanation of the balance, a breakdown of the penalties and interest, and instructions to rectify the problem.

When you receive a letter from the IRS, the best thing to do is address it immediately. Owing money to the IRS is like having a broken foot. If you keep walking around like nothing’s wrong, it’ll only make the problem worse. Call them back at the number on your bill as soon as possible to let them know you received it. That will stop them from escalating their collection attempts. Even if you can’t pay your balance in full at the time, they’ll help you work out a payment plan[5].

If you don’t respond, they won’t stop trying to collect until they get what they want or the statute of limitations passes, which takes ten years. Whatever you do, don’t try to wait out the IRS for a decade. It won’t go well.

👉 Tired of giving so much money to the government? Here are some great strategies to cut your taxes.

If you don’t respond to the IRS fast enough, they’ll take increasingly aggressive steps to collect what you owe. It may take them several months and several notices to escalate matters, but they will eventually come after you.

Once they decide that you’ve neglected or refused to pay your debts for long enough, they’ll send you a Notice of Federal Tax Lien. Ten days after sending the notice, the lien will automatically become active. At that point, they have a claim to your property and income that comes before any other lender’s. Tax liens no longer appear on your credit report, but they may appear in public records and many lenders perform public record searches before approving loans.

Levying Your Assets or Wages

If the lien doesn’t inspire you to reach out or pay your debts, the IRS can levy (seize) your assets or garnish your wages. They can do any or all of the following:

Until your debt is gone, nothing is safe. At the very least, they’ll intercept any future federal and state tax refunds.

Take Initiative and Make Your Tax Debts a Priority

Appeasing the IRS requires you to take the initiative. They provide taxpayers with plenty of opportunities to extend their deadlines or pay their debt in installments. They may even waive penalties if a taxpayer has a reasonable cause for their offenses, like illness or natural disaster[6].

The IRS is willing to work with you, but if you’re not proactive, they can also come after you in ways that other creditors can’t. The IRS is the most powerful debt collector in the country. They can file liens and levy your assets or income without even having to go through a court proceeding first. Bankruptcy won’t discharge tax debts, and you can’t even flee the country to get away because the IRS can lock down your passport.

You don’t need to see first-hand what happens if you don’t file or pay your taxes. If you have multiple outstanding debts, make payments to the IRS your priority, no matter how aggressive your other lenders are. Make contact, discuss payment options, take on an installment plan if you need to, but don’t ignore them, because they won’t ignore you!

Do you have any questions about what happens if you don’t file or pay taxes? Let us know in the comments!