Does it Matter Where You Go to College? 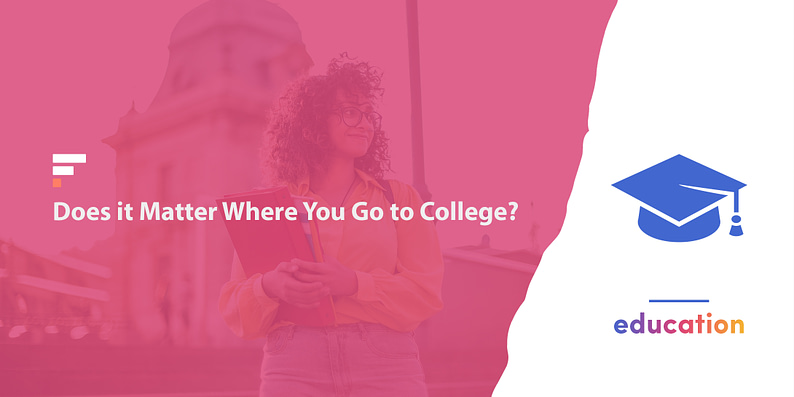 Every year high school seniors across America go through the ritual of applying for college. They weigh the differences between private colleges and state colleges, in-state or out-of-state, traditional or for-profit colleges. These decisions seem critically important to the people filling out the applications. On the larger scale, though, are they really so significant? Does it matter where you go to college?

The answer to that question depends on several factors, and it’s worth taking a closer look.

You may have heard some people say that college is worthless, but the data don’t support that story. Studies support a wide range of benefits to attending college.

Those figures add up to a powerful case for attending college, but how much difference does your choice of college really make?

Your college options fall into a few broad categories.

The differences between these schools are clear enough, but the impact of those differences on your future may be less clear. For example, imagine that a student is accepted at both a private university and a state university in their state of residence. What would that student lose by selecting the much more affordable state option?

The Difference: Earnings 10 Years After Graduation

Some of the differences between colleges, like prestige and student experience, are hard to compare. It is easier to compare the impact of college selection on income.

Other studies suggest, however, that the income gains from attending a selective school vary widely among majors[1]. Specifically, they found that the gap between more selective and less selective schools was minimal in engineering and other STEM fields, but much more significant among business and liberal arts graduates.

Diplomas from prestigious schools boost future earnings only in certain fields, while in other fields they simply don’t make a difference.

But What About Costs?

A degree from a selective school will probably allow you to earn more than a degree in the same field from a less selective school. It will also cost you more, in many cases a whole lot more. Let’s look at some of the differences.

The most exclusive private colleges and universities may cost substantially more. The University of Chicago, for example, costs an eye-watering $77,556 a year for tuition and room and board alone, for a total degree cost approaching $350,000!

Assuming that the discussion is based purely on costs vs. expected income, we then have to decide whether the higher incomes earned by graduates of exclusive schools justify the higher cost.

A report from the Georgetown Center on Education and the Workforce determined that the economic gain from a private not-for-profit college is $838,000, while that of a public college was $765,000[2]. That’s a difference of $73,000. That study included the actual cost of the degree in its findings, but there are other factors to consider.

Much of this comparison depends on how you intend to finance your education.

Most American college students now finance at least part of their education with student loans. If you’re using loans to finance your education you’ll have to factor interest expenses into your calculations.

The loan expense isn’t the only burden. Many people who are paying off student loans find it difficult or impossible to save for retirement early in their careers, depriving them of those critical early-career investments that have the most time to grow.

If you were investing your money instead of paying off loans, you could have that $36,000 in a retirement account at age 35.

Assuming that the money is in index funds and that the stock market maintains its historical long-term annual average gain of 10%, that would be worth almost $400,000 by the time you’re 60.

That’s a compelling argument for minimizing your debt burden, even if it means attending a less exclusive school

If you’re financing your education with loans, there’s a strong argument for selecting a less expensive school, minimizing debt, and making early-career contributions to a retirement fund rather than paying off a huge student loan bill. It’s even possible to go to college without debt!

Some parents are still able to pay for college with their own money. In that case, wouldn’t it make sense to invest in an exclusive school? Maybe, but it might not be the bets decision.

Let’s say you could afford the $215,000 cost of a degree from a 4-year private college for your child. If your child attended an in-state public university the cost of the degree would be $103,456, a difference of $111,544. That’s assuming that your child lives away from home: living at home would cut the cost far more.

What if you sent your child to an in-state public college instead of that private school and invested the extra $110,000 for your child’s future? Let’s say you make that investment when your child is 20, with the same investment assumptions used above. By the time that child is 60 that fund would be worth over $4.5 million.

We’ve been basing our calculations on the assumption that you’re paying the entire cost of your education, either with your own money or borrowed money. In practice that is often not the case.

You may have heard that over 86% of undergraduate students receive some form of financial aid. That figure is accurate, but it includes federal student loans. The number of students getting outright grants is significantly lower. 42.6% of students get federal grants, with the average grant amount standing at $5,179 a year[3].

💡 Many private colleges, including very exclusive ones, have their own financial aid programs. Harvard, for example, costs $74,600 a year, but 55% of the students receive some level of scholarship from the school, potentially along with other aid sources. 20% of the students pay nothing at all.

Scholarships and grants can significantly defray the cost of education, but don’t count on a free ride. One source of financial aid data claims that 1.% of undergraduates in 2015-16 were getting enough scholarship aid to cover the entire cost of their education. 2.7% had enough to cover 90% of the cost, and 18.8% had 50% of the cost paid for them[4].

Of course, you could be one of those that get the scholarships. If you get accepted to an exclusive private school and receive a substantial scholarship, that would swing the financial balance in favor of that school. You’d be getting the benefits of that exclusive degree at much less than the sticker price.

Ultimately the choice that matters is whether where you go to college makes a difference for you. Each student is unique and each college has its own cost/benefit ratio. Here are some things to consider when making that personal decision.

If the most cost-effective solution for you is a less exclusive college or an in-state private college, don’t feel as if you’re handicapped. A motivated student from any college can succeed. Plenty of State University graduates are achieving as much and earning as much as their Ivy League counterparts, and a degree from an exclusive school does not assure success.

In that sense, where you go to college really doesn’t matter, or at least it doesn’t matter as much as some may think. The averages might say you’ll do better if you come out of an exclusive private school, but you don’t have to be average! Many, many students have come out of less prominent schools and enjoyed successful and rewarding careers. You can do it too!

What are your thoughts? Does it matter where a person goes to college? Share your opinions in the comments below!

Steve Rogers has been a professional writer and editor for over 30 years, specializing in personal finance, investment, and the impact of political trends on financial markets and personal finances. His work has appeared in The International Herald Tribune, Foreign Affairs, and The Journal of Democracy, among many others. On rare occasions he has been known to throw a shield.