College Is Worthless! You’ve Heard the Stories, but Is It True? 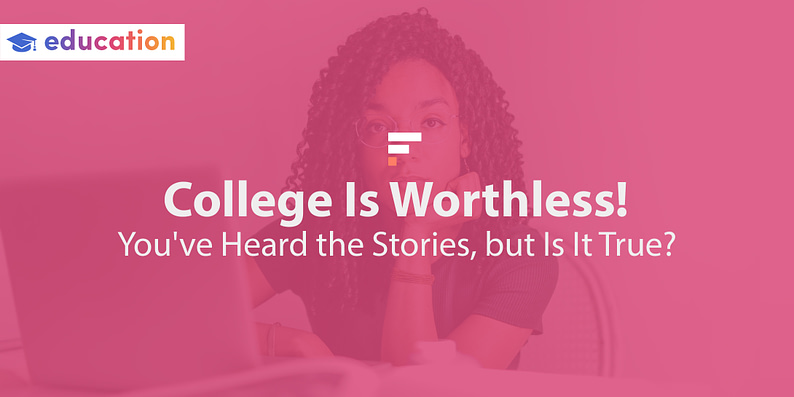 Since 1980, the cost of college tuition in America has gone up by 1,200%. Meanwhile, the total consumer price index (the measure of general inflation) has only risen by 236%.[1] The disproportionate increase in the cost of higher education combined with an increasingly competitive job market has many Americans worried that college is worthless or at least declining in value.

Some support their claim by pointing to billionaire business owners who never finished college. Others have stories about a highly educated person working a minimum wage job. In both cases, the anecdotal evidence doesn’t prove much. To get to the truth, it’s always best to rely on the data. Here’s what it has to say about the value of college in 2021.

Why People Claim College Is Worthless

There are many reasons people become cynical about the value of college, but they tend to use the same handful of arguments to denigrate it. Let’s take a look at some of the most common ones and see whether the facts support them.

1. “Your Major Is Probably Worthless“

There’s a common stereotype that college students often decide to major in something financially impractical (like theater or the social sciences) and then complain when they can’t get a job upon graduation. If everyone were getting worthless degrees, that might imply that college is worthless as a whole, but the facts don’t support that story.

The vast majority of students, especially those from lower-income households at less selective universities, choose career-oriented majors. 62.7% of them study practical fields like engineering, science, business, and medicine.

Only 11.3% pursue the social sciences and performing arts.[2] At the wealthier, more selective universities (which is a small subset of colleges), that number only goes up to 25%. It’s probably because the average student at these schools worries less about learning a trade. They’re more likely to come from connected, wealthy families.

58% of American undergraduate students choose to go to college because they believe it will advance their career prospects.[3] Most don’t care nearly as much about the social aspect or even necessarily increasing their knowledge. They just want to get a good job and a stable income upon graduation.

There’s nothing wrong with that mindset, but it inevitably leads some graduates to conclude that college is worthless. There will always be people who complete four years of tuition payments, take on thousands of dollars of debt, and find that they have no job prospects. It’s not surprising that they feel their time, money, and efforts were wasted, but all they’ve proven is that a degree doesn’t guarantee employment.

📘 Read More: Are you struggling to get rid of your student loans? Take a look at our favorite strategies for paying them off: 13 Tips for How to Pay Off Your Student Loan Debt.

On average, college still dramatically increases your chances of getting a job. In 2019, employment for people between the ages of 25 and 34 who completed their bachelor’s degree was 87%.[4] It was only 74% for those who graduated high school but didn’t have any higher education.

Interestingly, employment was still noticeably higher among those who only had some college education (and never got a degree). 80% had jobs in 2019, a full six percent more than those without any college experience.

Another of the most common anecdotes people use to demonstrate that college is worthless is that they, or someone they know, got a college degree and ended up in a low-paying, “unskilled” position anyway. Maybe they got a degree in Biology and ended up letting it languish while they work as a barista.

Alternatively, they might say that people like Mark Zuckerberg, Bill Gates, and Steve Jobs didn’t need to go to college to become billionaires. You can grow a business and become wealthy without wasting your time and money on a lousy degree.

📘 Read More: Interested in starting your own business one day? Take a look at our favorite strategies to pull it off while working full-time: How to Start A Business While Working Full-time.

If people who go through the hassle of college make the same amount of money as those who don’t, then what’s the point? You might as well skip the expensive four-year vacation and get right to work.

Once again, the numbers don’t support this argument. College graduates earn about one million dollars more over their lifetimes than people who only graduated from high-school, even after accounting for their extra years in the workforce[5].

That’s a life-changing amount of money, and the trend is visible in today’s market. In 2019, American workers between the ages of 22 and 27 earned $14,000 more per year with a college degree. Even if that gap were to remain the same over a 40-year career, that would be a difference of $560,000.

In all likelihood, though, the income differential is likely to grow larger over a career as promotions accrue. Even when college graduates work in “unskilled” jobs, they earn more than their counterparts without degrees, and they’re much more likely to eventually rise above those positions.[6]

4. “The Cost of College Outweighs the Benefits“

Of all the common reasons people argue against going to college, this one has the most merit: “College still has some value, but your time and money would be better spent elsewhere.”

It isn’t easy to prove one way or another, given the wide range of possible costs and benefits to obtaining a college degree. However, once again, the average outcome of attending college is superior to entering the workforce right out of high school.

The average total cost of tuition at a 4-year public college is $174,884. Once you add in the lost income and the interest on student loans, the total average cost of a bachelor’s degree is a whopping $400,793[7].

That’s an impressive sum, but as we said before, college graduates earn an average of a million dollars more during their careers than non-graduates. If you invest even a portion of that extra money into income-producing assets (the opposite of debt), the equation favors a college degree even more heavily.

📘 Read More: If you’re smart enough with your money to have some savings each month, there’s a good chance you should be putting part of it toward long-term investments. Take a look at our guide to getting started: Investing 101: Investing For Beginners.

The numbers are in, and it’s undeniable that college still has a significant monetary value. If you have a degree, you’re more likely to get a good job right out of college in your chosen field than your peers who don’t. Throughout your career, you’re likely to get promoted faster and make a lot more money.

College is an investment like any other, and it provides a quantifiable return. That said, it’s not the optimal investment for everyone. You may find that your time and money would be better off elsewhere, depending on your goals, preferences, and financial starting point.

Remember, You’re Not Necessarily the Average

Humans like to use medians and averages to figure out what will they can expect to happen to them, but a truly average experience is (counterintuitively) rare in many circumstances. For example, the stock market averages roughly a 12% return each year. In practice, it’s more like plus 35% one year and negative 10% in the next.

The cost and benefits of college are similar. For some people, attending college is a slam dunk. They might get a full scholarship to a great school, a valuable degree, and find themselves with a six-figure job locked in before they graduate.

Other people take out loans to pay tuition at an expensive out-of-state university, struggle through four years of tough courses, then find that no one wants to hire them. The numbers suggest that most people are better off with a degree but don’t take that as a guarantee.

Do the Math Before Investing in College

As you can see, the claims that college is worthless are mostly baseless, even if your only definition of value is economic. People who graduate with a useful college degree from a good school still have a statistical advantage in the workforce.

Before you commit to the steep investment of a college degree, do the math on your return. Figure out the total cost of your intended degree, including missed wages and the interest on any loans. Compare that to the increase in earnings you expect to receive upon graduation. Use data from people in your desired career path to get an approximation. Consider other possibilities, like trade schools or associate degree programs, which can lead to steady employment without excessive cost or debt.

If you need help with the decision to go to college, consider working with a professional guidance counselor. They can help you figure out how much your degree would cost and how much it might benefit you on the back end.

What do you think? Is going to college worth the cost? Let us know in the comments!