College Drinking: How Much Do College Students Spend on Alcohol? 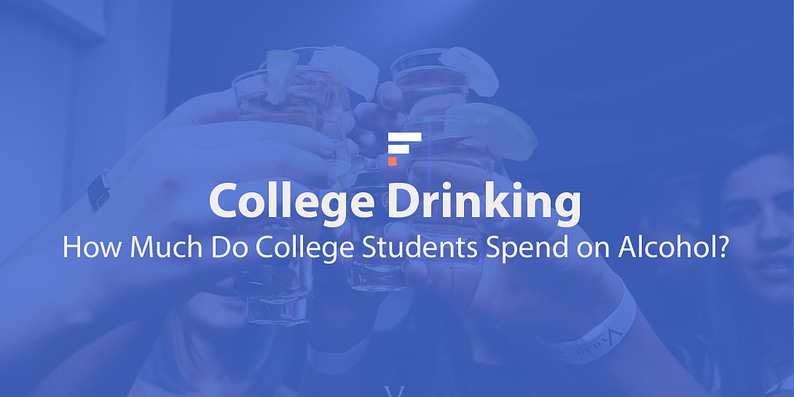 There are plenty of health-related reasons to minimize college drinking. It’s common knowledge that alcohol is bad for you (especially before your brain fully matures), and young people are particularly prone to the type of binge drinking that often ends in disaster. The physical toll isn’t the only cost of alcohol consumption. Have you ever stopped to wonder just how much college students spend on alcohol?

The cost of college drinking is higher than you might think, and money is often already tight during those years. So whether you’re a college student looking to rein in your expenses or a parent who’s concerned about their child, alcohol spending is a solid place to start searching for savings. Let’s take a look at the numbers.

How Much Do College Students Drink?

As in many cultures worldwide, alcohol has long been the socially acceptable drug of choice in America. It’s become so normalized that, despite the legal drinking age here being 21, the typical American gets drunk for the first time at just 14 years old.[1]

By the time they go off to college, the majority of teenagers have at least tried alcohol. If they haven’t, they almost certainly will once they arrive. 85.6% of college students report having had alcohol at some point.[2]

While that means the vast majority of college students will at least try drinking, it doesn’t say much about how often they’ll engage in the behavior. Unfortunately, those numbers are harder to pin down.

The estimates vary significantly by source. On the low end, one study reports that female college students consume four drinks per week and males consume nine[3]. On the high end, one survey claims those numbers are 14 and 19, respectively[4].

☝️ Unfortunately, any survey numbers are likely to present a distorted perspective somewhat, for a couple of reasons.

First, a college student’s drinking probably won’t remain consistent throughout their career. For example, freshmen may get sucked into the party scene early on, slowly taper off over the next couple of years, then resurge once they turn 21.

Second, most of these survey results depend on college kids reporting on themselves, which can skew the numbers downward significantly. Many underage students are afraid of getting in trouble and probably won’t accurately report their activities.

The Costs of College Drinking

Calculating the cost of college drinking isn’t quite as simple as estimating the number of drinks they consume and multiplying that by drink costs around the country. A lot can add to the cost of drinking in college besides the price of the alcohol itself, such as:

Each of these contributes to the cost of college drinking, and they can seriously inflate the final tally. College students who do anything more than split a bottle of liquor in a friend’s dorm room will often spend a lot more on these supporting expenses.

Assuming they manage to avoid any establishments that would charge them for entry, that means they’d spend something like the following:

That adds up to about $27. From personal experience, that sounds about right. I’ve always been naturally frugal (a prerequisite for becoming a Certified Public Accountant and personal finance writer), and I expected to spend at least $30 on any college night out in San Diego.

That’s a pretty solid estimate. According to Business Insider, a night out in a major city will cost somewhere between $106 and $16 in drinks alone[7]. When you add in commuting costs, $30 a pop is a solid low-end estimate for the costs of a night drinking in college.

For the most intense partiers, the number of times they consume alcohol at a social gathering may jump from once a week to three or four. They’re also more likely to drink hard liquor and cocktails instead of beer or wine. That inflates the cost of each drink.

A bottle of liquor contains roughly 17.5 drinks and costs about $23.[9] The average cocktail costs $12.[10] Assuming an equal split between the two, that’s an average drink cost of about $7.

If we multiply that by the average of the higher weekly drink estimates from before, that comes out to drinking costs of $115 per week. When you add in those pesky rideshare costs of $16 for four nights out each, the total comes to a whopping $180 per week.

That may sound insanely high, but it might actually be conservative for the upper limit. Students who drink frequently are more likely to develop an increased alcohol tolerance, buy expensive liquor, and frequent establishments that have cover charges.

Even worse, they may buy table or bottle service once they turn 21 (or acquire a fake ID). That can cost easily cost between $500 and $1,000 each time. Even when splitting that between friends, that adds up quickly.

Only the most privileged college students could sustain this level of spending for any length of time, of course, but they do exist. When you consider that the average traditional private university student spends $53,949 each academic year, these numbers pale in comparison.[11]

What Would College Students Have if They Invested That Money Instead?

Money can be scarce in college. Roughly 70% of college students report that they feel stressed about their finances to some degree.[12]

When you’re operating in a financial deficit (or at least a very thin margin), every dollar counts. I’m not going to argue the morality of college drinking, but the finances of it are pretty clear.

You’d be much better off financially at the end of your college career if you invested your would-be partying money in a low-cost index fund. Here’s about how much:

You can play around with the numbers yourself using our savings calculator.

Those returns are based on typical stock market returns[13], and they aren’t guaranteed. If you’d like to know more about how to use money to make money, read up on the basics of investing.

The average student loan debt at graduation was $36,140 in 2020.[14] That means that if a college student were to invest all their hypothetical alcohol spending and then put it toward their debt upon graduation, they could reduce their loans from anywhere between 20% to 100%.

There’s a lot of wiggle room and estimation in these numbers. Even the conservative estimates show that there are significant potential savings to be found.

Learn More: Want to learn about some other ways you could accelerate your student loan payoff? Take a look at our favorite tips for some inspiration: 13 Tips for How to Pay Off Your Student Loan Debt.

College is ultimately about preparing for adulthood, and that should include learning how to manage money. Unfortunately, most college curriculums don’t do much to teach that skill.

I had to go out of my way to take a personal finance class in college, even as someone who was double majoring in finance and accounting at a school known for its business program. That’s usually the way it goes currently. As it stands, learning to manage money in college falls on the students and their parents.

The costs of college drinking are significant. There’s also the potential for missed classes, health problems, and accidents. Understanding the expenses involved and learning to keep them in check is a great learning lesson for college students.

If you’re a college student or the parent of one, don’t be too relaxed about the issue. College drinking can be expensive on its own, but there’s also a very real danger that the spending habits – and the drinking habit – will solidify and continue throughout adulthood. It’s easy to see it as a normal part of youth, but it’s a part of youth that can easily get out of hand and cause serious financial and personal problems.

Do you think we under or overestimated the cost of drinking in college? Share your thoughts in the comments below!