Budgeting in Belgrade: The Personal Finances of a Family in Serbia 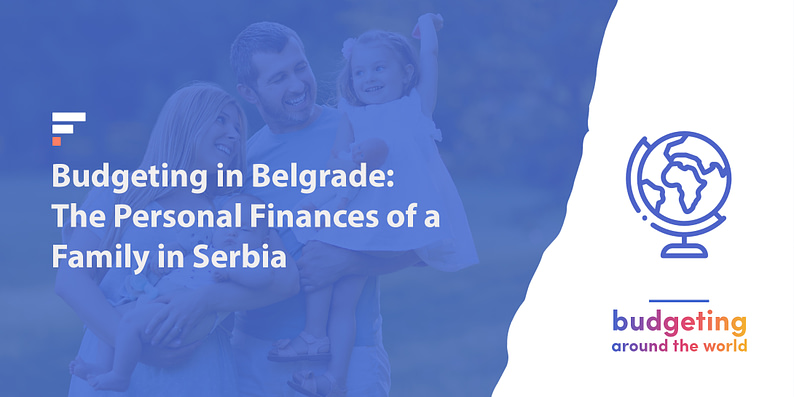 Personal finance is intensely personal – hence its name – and at the same time universal. Each person’s finances are unique, but all of us, wherever we live, have to balance our resources with our needs and wants. This series on Budgeting Around the World looks at the steps individuals and families in different environments are taking to meet their unique needs. Today we’ll discuss budgeting and personal finance with a family of four from Belgrade, Serbia.

Serbia is a landlocked state in the Balkan region of southeastern Europe. Like much of the former Soviet bloc, Serbia went through a period of dramatic economic change after the fall of the Soviet Union, and economic development was delayed by the conflicts that followed the breakup of the former Yugoslavia. Today’s Serbian economy has attracted significant investment in manufacturing, though agriculture still employs 15% of the workforce, primarily producing fruits and grains.[1] Per capita GDP ranks 38th out of 44 European countries.[2] The cost of living is also among the lowest in Europe, ranking 35th out of 40 European countries in the Numbeo.com cost of living index.[3]

🌎 This article is part of our Budgeting Around the World series, a comparative look at how people around the world manage their money.

👼 Click here to learn how you too can contribute to this series and help us support a great charity in the process.

What Does it Cost in Belgrade?

On the “Big Mac Index” Serbia ranks among the less expensive economies, between Ukraine and Azerbaijan, with the iconic burger costing the equivalent of US$2.08.

📘 If you’re interested in budgeting but not sure where to start we’ve got you covered. Read our guides on how to start budgeting and choosing the right budgeting method.

Getting to Know the Household

We started our interview with some basic questions about the household, their lifestyle, and their approach to managing their finances.

Introduce yourself – Tell us a couple of things about yourself so we get to know you better.

Location – Where do you live (city, country)? What kind of place is it? How do you like living there?

Belgrade, Serbia. It is the capital of Serbia, with around 2 million people, very busy, polluted, mismanaged… Currently being gentrified in a horrible way.

Household structure – How many adults, kids, what ages?

Occupation – What do you and other adults in the household do for a living?

I run my own small business, my wife works at the Post Office.

Net household income – What is the take-home pay of your household (income after taxes and other deductions)?

How would you describe your standard of living? – Based on the place you live in, your income, compared to other people around you…

First You pay the bills and the mortgage then you spend what is left. We do not use a budget, if we have some unexpected expenses we use the money we saved up. We make the decisions together.

Let’s Break Down the Expenses

📧 Get notified when we publish the next post in this series by subscribing to our newsletter!

We mainly shop in the green market and cook at home. Green markets in Serbia are much less expensive than they are in other European countries.

2,000RSD prescriptions (US$20)
1,000RSD supplements (US$10)
2,000RSD dental care (US$20)
Dental insurance is included in the universal health insurance program, but most Serbians prefer to pay for private services.

* All figures are as reported by respondents. Totals may not add up to 100%.

📘 We only included the categories in which this particular household has any monthly expenses. View the full list of budget categories we used for this survey, along with what’s included in each of those categories: 110 Budget Categories.

What are your thoughts on this personal budget? Let us know in the comments below!

Share Tweet Post
The content on finmasters.com is for educational and informational purposes only and should not be construed as professional financial advice. Finmasters is not a financial institution and does not provide any financial products or services. We strive to provide up-to-date information but make no warranties regarding the accuracy of our information.
Copyright © 2021 FinMasters | Powered by VertiStudio
Go to mobile version
X