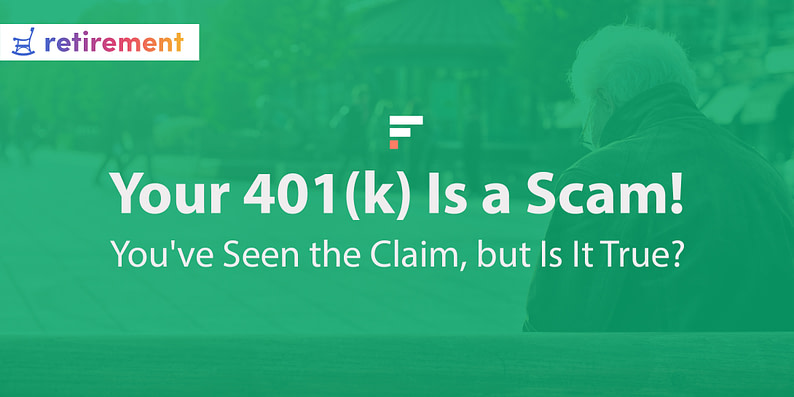 The 401(k) has become America’s most popular retirement plan. In 2020, 60% of all workers had access to one, while only 25% had access to a pension plan. Not everyone is happy about that. There are some critics of 401(k)s in their current form, including their creator, Ted Benna, who set up the first 401(k) plan in 1980. Some go so far as to say that the 401(k) is a scam that robs Americans of their hard-earned retirement funds.

But what arguments are these people making, and do any of them have merit? If so, what does that mean for your retirement strategy? Let’s take a look at the issues people have with the 401(k) and figure out whether you should be concerned.

Common Reasons People Claim the 401(k) is a Scam

A number of criticisms of 401(k) plans have appeared on various websites. These are some of the most common.

People who make this claim seem to be basing it on anecdotal evidence. For example, Grant Cardone (multi-millionaire real estate investor) claimed that he would never put his money into a 401(k) plan. But Mark Cuban (billionaire Shark Tank-er) is all for them.

Data put out by the Bureau of Labor Statistics (BLS) in March 2020 indicates that earning more generally correlates with investing in a 401(k)[1]. Of the top ten percent of income earners with access to 401(k)s, 83% chose to participate in their plans. Of those in the bottom ten percent of that same group, only 48% did. The trend held at all the increments in between.

In any case, there’s no reason to think that people with wealth at vastly different orders of magnitude should follow the same investing strategies. There are plenty of logical reasons why the ultra-rich wouldn’t use a 401(k) plan.

None of this implies that the 401(k) is a scam. After all, LeBron James is much more likely to drive around in a Porsche than a Prius, but that doesn’t make Toyota a bunch of scam artists.

One of the primary advantages of investing in a 401(k) is its ability to reduce your tax liability. Theoretically, you’re supposed to benefit in three ways:

People who claim the 401(k) is a scam take issue with the third benefit. They believe that the federal government’s current habit of overspending will cause future tax rates to be higher than they are now.

They point to the fact that rates have been higher in the past as evidence that the federal government is willing to raise rates when necessary.

This argument is flawed for three reasons:

It’s impossible to predict what the future will hold, including which direction tax rates will go. That’s why it’s usually best to diversify your accounts between traditional and Roth holdings, whether or not you think rates will be higher in the future.

📘 Looking for some new ways to save on your taxes? Take a look at some of our favorite strategies: 8 Practical Ways to Cut Your Taxes

3. “Employers Take Your Company Match Out of Your Salary.”

Another significant incentive to investing in a 401(k) plan is that many employers offer to match part of their employees’ contributions. That might be a dollar-for-dollar contribution or a percentage of their contribution. Either way, they’re usually capped at a portion of the employee’s salary.

But there has been at least one study that suggests employers tend to lower salaries to afford their 401(k) matches[2]. The study claimed that, on average, the relationship is proportional for most workers. That means that every dollar a company offers in their 401(k) match lowers their salary offer by the same amount.

Compare jobs on their total compensation package, including salary, 401(k) terms, and health insurance. There’s no need to worry about it after that. If you negotiate a higher salary or get a raise, your employer won’t suddenly decrease your company match to compensate.

Again, this isn’t a reason to think the 401(k) is a scam. In fact, it’s not even technically true. You can take a distribution from your 401(k) plan whenever you like. You’ll just probably have to pay a 10% penalty on the cash if you do so before age 59½.

There are even ways to get around the penalty if you have to. In cases of emergency where people desperately need to access their funds, they can waive it. For example, if they:

Besides, the whole point of a retirement account is to save money for retirement. If people could use the cash ahead of time without any difficulty, they probably would. The limitations are there so that people can force themselves to stay disciplined.

💡 If you’d still prefer to have access to your retirement funds ahead of time, Roth 401(k) plans can help with that problem. The contributed portion of any withdrawal you make from a Roth 401(k) is tax-free and penalty-free, though the portion due to investment returns is not.

There Are Some Legitimate Concerns

The 401(k) is not a scam in the literal sense of the word. The plans are not a deliberate attempt to rip anyone off, and 401(k)s are often a useful component of a diversified retirement portfolio.

Here are some legitimate concerns to consider:

Some 401(k) plans are better than others, and you should always assess their terms before accepting a compensation package with a new employer. Keep in mind that the company match is only one aspect of the plan. Ask about the fees, investment options, and vesting schedules too.

☝️ When you compare jobs consider all aspects of compensation, not just salary. Health insurance and retirement plans are important parts of any compensation plan.

While the 401(k) is not a scam, it’s not an option for everyone. Many employers’ 401(k) plans come with unfavorable terms, and some workers might not have access to one at all.

Fortunately, there are plenty of other retirement account options out there, such as:

Take a look at our breakdown of these 401(k) alternatives if you’d like to learn more. If you’re not sure what you need, a financial advisor or a Certified Public Accountant can help you find the best retirement account for your situation.

Is 401(k) a scam or are these claims totally without merit? Share your best argument in the comments below!