Why Is Healthcare So Expensive?

Last Updated: April 26, 2021
Posted in: The Breakdown
Leave a comment 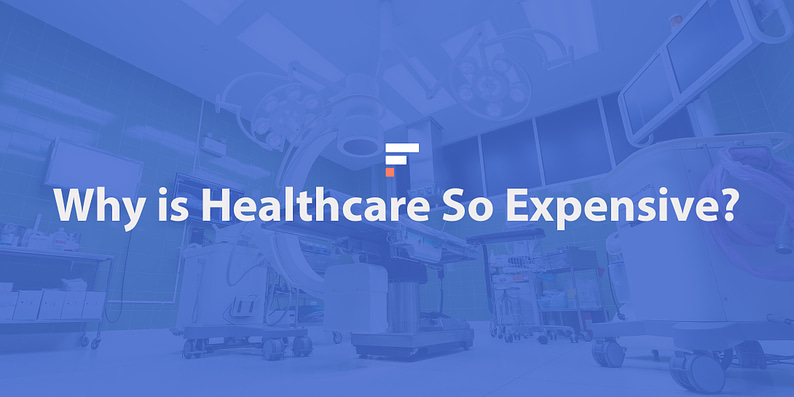 Americans across all 50 states are struggling to pay for medical services. There’s a reason for that. The USA has the world’s most expensive healthcare by a wide margin, despite having health outcomes that are often below those of other developed countries. But why is American healthcare so expensive?

To get to the bottom of this mystery, we crunched the numbers across multiple medical industry reports. We uncovered seven reasons why American healthcare is so expensive.

Before we start looking at why American healthcare is so expensive, let’s get a handle on just how expensive it really is.

How Expensive is US Healthcare?

The United States is in a league of its own when it comes to healthcare spending. Data generated from the National Health Expenditure (NHE) and OECD Health Statistics show that in 2019, the U.S spent an average of $10,966 on health per person (or per capita)[1].

👉 That means the U.S is spending 42% more than its closest counterpart, Switzerland.

👉 The combined average healthcare spending in the 11 comparable countries was $5,697. That’s just over half of what Americans spent.

A Look at the Numbers

And here’s the corresponding distribution table, based on each country’s GDP per capita, plus their health spending per capita:

The U.S. hasn’t always outspent its peers. In the early 1970s, the U.S. total healthcare expenditure was at par with other comparable countries. They were all spending about 5% of their GDP on healthcare.

Things started changing in the late 70s and early 80s. While other wealthy countries kept their health spending between 5% and 8%, the U.S. went well beyond 10% of the country’s GDP. By 2019, the U.S. was already using up 17% of its GDP on healthcare.

The gap is still expanding with each passing year.

The spending gap extends to prices of common procedures. According to price guides published by the International Federation of Health Plans, U.S. medical centers charge the world’s highest rates for healthcare services[2].

And the same applies even to lifesaving healthcare services like cancer treatment. Breast cancer patients in the US pay $211 for a Herceptin injection, while South Africans are paying only $44.

Who Pays for Healthcare in the US?

The US healthcare system isn’t just the most expensive in the world, it also places an unusual proportion of the burden directly on consumers. Health insurance costs are spiraling, and many plans are increasing deductibles – the amount you have to pay before insurance kicks in – and other out of pocket costs.

#Healthcare isn't just more expensive in the US. It's a WHOLE LOT MORE EXPENSIVE. 🤕
Click To Tweet

These costs can far exceed the savings of many Americans, leaving even Americans with insurance unable the pay the cost of an illness or injury.

Why Is Healthcare So Expensive in the US?

Healthcare is a complicated business, and many interacting factors drive the cost gap. Here are some of the most significant ones.

David Cutler, a Harvard health economist, reveals that administrative costs alone account for about one-third of the total healthcare spending in the U.S., while countries like Canada are spending only a fraction of that[4].

You can blame that on the complex paperwork surrounding medical billing and insurance systems. American healthcare organizations, insurance companies, and employers put a lot of resources and time into all sorts of administrative procedures. They are always trying to figure out how to organize their insurance payments and payment collection systems and how to bill various insurers for different medical services. Different insurers often have different billing systems, leading to the uniquely American phenomenon of hospitals with more billing clerks than physicians or beds.

🧮 The U.S. healthcare industry now has job positions that you won’t find in any other country, including professionals like claim-submission specialists and medical-record coders. All of these are ultimately paid by patients.

Sadly, U.S. providers don’t stop there. Once they sell the accounts to collection agencies, they still have to cover their costs. They do this by passing them on to the paying customers. That means that at the end of the day, you’ll be forced to meet not only your medical costs but also those of the people who couldn’t pay.

At the same time, collection agencies are aggressively pursuing the person who couldn’t pay in the first place. The same debt is effectively being collected twice.

A study published by the Journal of the American Medical Association found out that while the quality of healthcare in the U.S. is superb, many people can’t get it[5]. The U.S. has some of the best records for treating life-threatening conditions but offers contrastingly poor access to affordable primary healthcare.

In fact, of the eleven countries covered in the report, the U.S. recorded the lowest scores in the healthcare access category. Around 44% of Americans have missed a medical consultation because they couldn’t meet the costs[6]. That’s about double the corresponding average rate between all the 11 countries.

👉 Skipping a $150 filling may lead to a $700 root canal. A fever and cough that could have been treated with a prescription can become a hospital stay for pneumonia.

👉 A cancer that could have been treated if detected early can become an expensive losing battle for life.

All of these raise costs.

A 2017 research study by Brigham and Women’s Hospital, an affiliate of Harvard Medical School, established that while the number of medical malpractice claims has been dropping over the years, the accompanying settlement amounts on successful court cases have been increasing steadily[7].

👉 In two decades, medical practitioners have paid successful litigants about $329,565 on average, as compensation for malpractice.

Doctors and nurses have had to adjust their practices to minimize the risks that would otherwise attract these claims. It’s now common, for instance, for practitioners to prescribe extra tests or medications that might not be necessary, just as a precautionary measure.

These practices have led to a 55.7% drop in malpractice claims, they’ve substantially increased the cost of healthcare.

The U.S. is fortunate enough to have a large number of medical specialists. As of March 2020, over half a million active specialist physicians were spread out across the country[8].

Now, with that huge population comes a new problem. American patients are now randomly referred to specialists even when it’s completely unnecessary. Conditions that could be treated by a general practitioner or nurse practitioner may be referred to far more expensive specialists.

Why is healthcare so expensive in the US? See 7 factors that influence the cost. 🏥
Click To Tweet

According to the 2020 Medscape Physician Compensation Report, medical specialists in the U.S. make an average of about $346,000 per year[9]. Primary care physicians, on the other hand, earn about $243,000 – which is more than $100,000 less than their specialist counterparts.

Part of that is that drug prices are regulated in many countries but are not in the US. Additionally, it just so happens that only private insurers get the privilege of negotiating drug prices with manufacturers. Government programs like Medicare and Medicaid cannot negotiate drug prices, despite the huge purchases they make from pharmaceutical companies. Individual consumers, of course, have no capacity to negotiate.

Another problem that comes with an open healthcare market is the lack of price transparency.

The U.S. sometimes seems like the Wild West for medical providers. Since the government leaves the price-setting to them, you’ll find them quoting all sorts of charges for their medical services. The prices vary quite extensively from one provider to another.

In some cases, the prices are dictated by not just the market demand, but also the type of payer, as well as geographical location. If you choose to pay with your private insurance, for example, you can expect very different rates from what government programs are charged for the same range of services.

With such a complicated pricing system, it becomes difficult for individuals to estimate even the costs of basic medical procedures. To make matters worse, hospitals and medical providers don’t usually publish their service price lists. You don’t find out the full costs until after treatment. This makes comparison shopping difficult or impossible.

🚑 Even if it was possible to do so, comparison shopping is just not an option in some situations. A good example of that is a medical emergency that will land you in the ER. Here’s what you need to know to understand the costs, understand your options, and plan for these unexpected costs: Emergency Room Costs.

And there you have it, seven reasons why American healthcare is so expensive. They aren’t the only reasons, but they give some idea of why US healthcare costs so much.

There’s an active debate on how best to control health care costs and make healthcare more accessible, with several proposals on the table. Congress is already working on the Lower Health Care Costs Act. If you’re concerned, study the issues, contact your representatives, and let them hear your opinion.

📘 The high cost of healthcare leaves many people struggling to pay their medical bills. If you are one of them and you want to know how to get help paying your bills we’ve got some solutions: 17 Ways to Get Help Paying Medical Bills in 2021

What are your thoughts on healthcare costs in the US? What points have we left out? Let us know in the comments section below!