Pink Tax: The Cost of Being a Woman 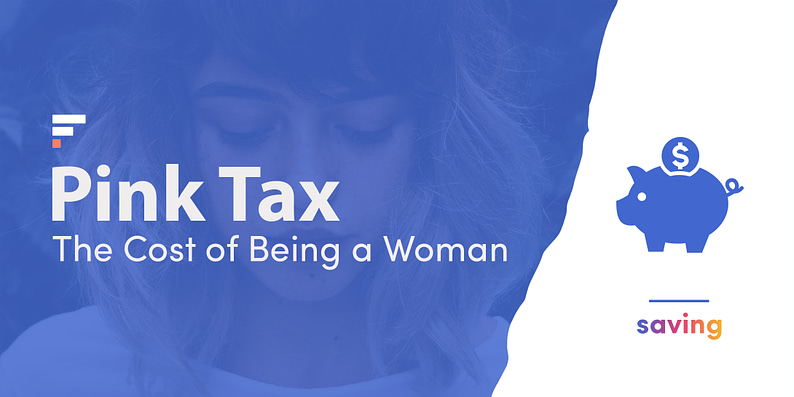 Imagine you’re a woman going to a dry cleaner’s with your husband. You each have a cotton dress shirt that needs to be laundered. Yours will end up costing $8.75 on average, while his will only cost $7. Seems unfair, doesn’t it? This discrepancy is an example of what has been called “the pink tax”: the arbitrary overpricing of products oriented toward women relative to identical male-oriented products.

The term was coined after several studies, notably one by the New York City Department of Consumer Affairs in 2015, determined that there was a significant price disparity between products marketed toward women and their male-oriented equivalents[1].

Since that time the pink tax has emerged as a subject of some controversy. Some people see it as an arbitrary act of discrimination that cuts into women’s finances. Others claim the price differences are justified by varying costs and by women’s willingness to pay the difference. Still others claim that the pink tax is a myth.

So is the pink tax real? And if it is, is it justified? Let’s take a closer look.

What Is the Pink Tax?

The 2015 NYC Department of Consumer Affairs concluded that price disparity exists and that its effects on women’s purchasing power are very real.

The study found that the pink tax starts early on in a woman’s life when her pink scooter will be more expensive to buy than a gender-neutral red one and follows her all the way into retirement, when even her back support braces may cost more than her male counterparts.

The study concluded that women pay on average 7% more than men do for similar or identical products. This includes children’s toys and clothes, adult clothing, senior health care items, and personal care products.

Unsurprisingly, the highest price difference (13%) is in the personal care category. If you want to see evidence of this in real-time, take a trip to the nearest Target or Wallgreens. You will find deodorants, shower gels, and even laxatives marketed to women that will have a higher price tag than those marketed to men. The only difference? The “feminine” packaging and scent.

A 1994 study done by the State of California determined that women pay an extra $1351/year for services like haircuts, dry cleaning, and even car repairs in some cases[2]. Adjust that price for inflation in 2021, and it’s closer to $2,400/year. That’s $2,400 that could be going into your savings account!

The tampon tax gets a spotlight because it is the most controversial example of the pink tax and it is an actual tax. In 70% of the United States, tampons are considered a “luxury good” and are taxed as such[3].

👉 To put this into perspective, in Iowa, cotton candy is tax-exempt but tampons aren’t.

Scotland recently decided to provide period products to all women at no cost. States in the U.S may not want to go that far, but they could at least make these necessities tax-free. Menstruation is neither a choice nor a luxury. It’s collectively costing women $275 million/year in taxes according to InStyle[4].

The good news is that movements like Tax Free. Period. have successfully managed to eliminate the tampon tax in several U.S states. Increasing pressure can encourage more to follow their example.

Why is There a Pink Tax?

One of the complications of the pink tax is that there may not be a single explanation that embraces all gender-based price disparities. For example, the finding that women typically pay more for car repairs than men may indicate that repair shops believe that women are less likely to know what a given job is worth, and take advantage by charging more. A finding that women pay more on average for haircuts may simply indicate that more women are opting for higher-priced salons while many men are content with simple barbershops.

Let’s look at some of the causative factors that could drive gender-based price disparities.

Gender-specific marketing practices accumulate over years, and many women reach for the pink product without comparing it to the male-oriented product. It’s not a conscious choice, just the impact of years of conditioning. Brands take advantage of this by strategically marketing their products to women and charging higher prices. That means higher costs to you and higher profits for them.

Will a pink razor add more value to you than the generic blue one? No, but brands will cleverly market it to seem that way because women are expected to meet gender norms society has placed on them.

⚠ If women don’t bother to check prices they may not be aware that there’s an equivalent product at a lower price a few feet down the aisle.

In economics, price discrimination refers to the practice of charging different prices for the same product or service to maximize profits. For example, two passengers may pay different prices for the same flight if they buy the tickets at different times. Price discrimination is based on the belief that a “fair” price for any given good or service is whatever the buyer is willing to pay.

Many critics of the pink tax concept claim that price discrimination is normal and reasonable. Markets operate fairly and if women are willing to pay more for “gender-specific” products then it is reasonable for sellers to charge higher prices. After all, sellers charge what the market – or any given segment of the market – is willing to pay.

Tariffs and Costs of Production

Most clothing sold in the US is imported. Women’s imported clothing has higher tariffs than men’s in the United States. Because of these higher tariffs, companies put the burden of the extra cost on the female consumer. While this explains the reason why women pay more to shop for clothes, it does not explain why there is a higher tariff for women’s clothing, to begin with (hint, it has nothing to do with the material[5]).

Some argue that the costs of producing a certain product justify its pink tax price tag. That could explain minor price differences. It doesn’t explain why a pink Radio Flyer scooter marketed towards young girls costs $20 more than the original red version, according to the New York City Department of Consumer Affairs study. Surely the cost of using a different color isn’t that high!

Lack of Information and Comparison

When you walk into a store to buy a body wash, your first instinct isn’t to price compare with men’s products. Most often than not, you take the price at face value because, well…that’s how it is.

This is why companies can implement their often biased marketing tactics and inflated prices for gender-specific products.

🛍 We buy the product because it’s made specifically for us trusting that the price is fair when in reality, it’s not.

Sometimes, the reason for the pink tax may not fall into a generic category. Let’s look at our laundry example from earlier. In that case, the reason why it costs more to dry-clean a woman’s shirt wasn’t that the fabric was delicate or embellished. It turns out that in many cases the industrial machines used to press are designed for male clothing[6]. Smaller women’s shirts didn’t fit on the machines and had to be hand-pressed. Women’s blouses may also have delicate features that require hand-pressing.

One of the challenges of quantifying the pink tax is that price discrepancies are neither constant nor consistent. In some cases, products priced at the same level by a producer may be priced differently by different retailers. There may be no discrepancy in one store and a substantial discrepancy in another. Some discrepancies are dispersed across wider markets and can only be confirmed by large-scale pricing studies.

In many cases, discrepancies that are identified and publicized are rectified as soon as they become publicly known. Retailers are acutely conscious of their public images, and once an embarrassing price comparison hits social media it’s likely to disappear. It’s hard to keep track of a “tax” that appears and disappears on different products at different times.

Gender-based pricing can cut both ways. While the gender tax often puts female consumers at a disadvantage, there are also instances where men pay more.

How You Can Help

You don’t have to put up with the pink tax. There are ways to get around it and to oppose it.

☝ The pink tax is built on the assumption that women will pay more for the pink product simply because it’s pink. That may be true on average, but we don’t have to be average. We can make a conscious choice to avoid that trap.

Where Do We Go From Here?

The pink tax affects both women and every household that has a female member. While the individual price difference for one product may not seem significant, the cumulative cost is.

We can fight the pink tax in two ways. One is to simply not pay it. We can always buy the cheaper product, even if it’s not marketed as a “women’s” design. If we stop paying the pink tax, sellers will stop charging it.

We can also challenge the pink tax. If you see instances of gender-based price discrimination for women and men, speak up. Bringing awareness is the first step to making a change. In 2020, Governor Cuomo announced a pink tax ban in the State of New York. In time, this momentum can carry over to the rest of the U.S. When it does, life will get a little cheaper, and we could all use that!

Do you think the pink tax is still a problem? What examples of the pink tax have you found in your day-to-day shopping? Let us know in the comments below!