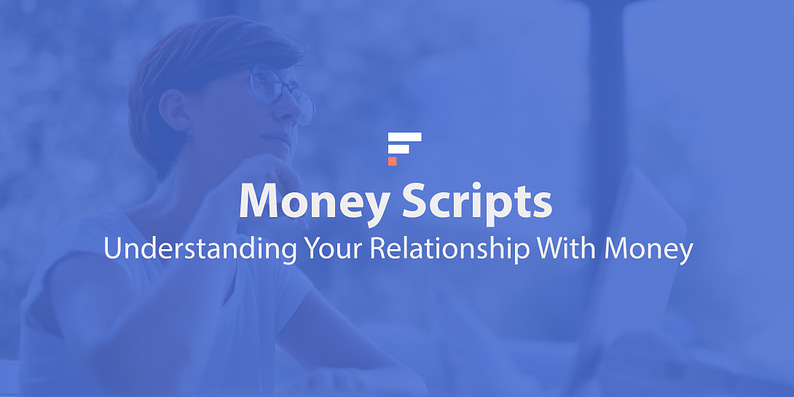 What if I told you that your subconscious beliefs are in control of your financial life? This might come as a shock at first. After all, you’re fully conscious of the choices you’re making. But even though you’re aware of your decisions, they are guided by your subconscious mind. Every financial decision you’ve ever made is influenced by the beliefs you have about money. These beliefs are known as money scripts.

Everyone has their own set of money scripts that influence their decisions around money. Knowing what yours are and why you have them is an important part of making better financial decisions.

Money scripts are not set in stone. However, once you understand them, you have the power to change them. We’ll help you do just that.

What Are Money Scripts?

Money scripts are subconscious beliefs about money that people develop as early as childhood. They can be shaped by your experiences or even passed down to you from your parents’ own beliefs.

Even though you may not be consciously aware of them, they have a powerful influence over the financial decisions you make as an adult.

The term money script was coined in 2011 by financial psychologists Ted Klontz and Brad Klontz in their famous Journal of Financial Therapy study about money beliefs and financial behaviors. During the study, they asked participants how much they agreed with 72 money-related beliefs such as:

Their study demonstrated that people’s financial behaviors and decisions are heavily influenced by their beliefs around money.

👉 For example:
Self-limiting money scripts such as “there will never be enough money” are linked to disordered financial decisions like carrying revolving debt.

Learning about the four types of money scripts is the first step to uncovering and understanding your own beliefs about money. Let’s take a look at each one and how it can impact your financial well-being.

“Money is the root of all evil”, a money avoider is likely to say. Following this belief, money avoiders associate affluence with greed and corruption. They also think they’re undeserving of money themselves, especially when others have less. This causes them to feel guilty for desiring money, as they associate it with being a bad person.

The study found that people who are money avoidant share similar characteristics, including worries and anxiety about money or extreme frugality.

Money avoidance can lead to unhealthy and self-sabotaging financial decisions like living in denial about your financial situation, having a low income, and not budgeting your money.

People who worship money believe that it will be their salvation. They associate having more money with freedom, happiness, and a better life in general.

As a result, people who subscribe to this money script often:

Ironically, money worshipers may also have a scarcity mentality that prevents them from attaining this coveted wealth. They will say things like “I will never be able to afford that” or “there will never be enough money to go around”. Because they worship money, they exaggerate its scarcity.

Do you believe your self-worth is tied to how much money you have?

Those with a ‘money status’ script certainly do. If you identify with this belief, you’re very competitive and you often compare your wealth to those around you. You believe that success is attained by acquiring more money and material possessions.

Klontz found that many people who carry this belief grew up in households with a lower income, and inherited the belief that attaining a higher socio-economic status will increase their sense of self-worth or bring them happiness.

The consequences of this money script include overspending, unhappiness, and anxiety. Money status believers also tend to keep their finances a secret even from their spouses. This is one of the biggest financial mistakes couples make, and it can lead to a lack of trust and communication.

People who are vigilant about their money resonate with some of the following statements:

If you relate to these money script, you’re on the cautious side when it comes to how you handle your money. What this means is that you don’t like to rely on credit cards, you have savings and emergency funds, and you believe money should be earned with work and not handed out.

Being vigilant about money is generally good for your financial health.

However, being too vigilant can lead to anxiety and worries about money. It can prevent you from enjoying the money you have and living your life to the fullest.

Do any of these money scripts describe you?

Good. Identifying your money script is the first step toward uncovering your unconscious beliefs about money and how they’ve been driving your decisions. Whatever your financial situation is at this very moment, you got here guided by these scripts.

But just as these limiting beliefs entered your subconscious, they can also be changed to improve your financial situation.

You Can Change Your Money Beliefs

There are actionable steps you can take to unlearn your current self-limiting beliefs about money and improve your financial well-being.

Step 1: Identify What They Are

First, identify what your money beliefs are and write them down. You may find yourself identifying with a specific money script category like money vigilance, or you may fall into multiple categories.

Then, observe the financial decisions you usually make and your beliefs. You should start to notice a relationship between the two. You’ll need to decide whether your money script is preventing you from reaching your financial goals. If it is, you may wish to change it.

Once you’ve identified your beliefs, it’s time to replace them with better ones, and take steps to break the habits that they formed in your daily life.

It’s time to rewrite your money scripts. Here are some examples:

Along with rewriting your beliefs, take actionable steps to change your habits:

Your beliefs should not associate money with negative feelings, but with positive ones.

People who associate money with happiness and believe that money is the solution to their problems are sorely disappointed when they finally get it and find out it hasn’t made them any happier.

Breaking out of this mentality is not easy, but it’s possible. Here’s how you can start:

Most importantly, detach your happiness from the concept of money. Find the happiness and freedom you think money will bring, in actual meaningful activities. This can include spending time with your loved ones, pursuing a hobby you enjoy, or giving to those in need if you have the means.

As with money worship, you need to detach your self-worth from how much money you have or don’t have. With that in mind, consider these helpful tips:

You should also learn not to define others by how much money they have and how successful you perceive them to be.

Being cautious with your money is generally associated with healthy money habits. However, being overly cautious takes the joy out of your life. When you become afraid to spend your money, what’s the point of having it in the first place?

Learn to have more of a balance. You can spend money on things you enjoy (like a holiday, a nice dinner, or a new outfit) and still be smart about your money habits.

How Financial Therapy Can Help

That’s where financial therapy comes in. A financial therapist can help you identify your unconscious self-limiting beliefs about money and how they’ve influenced your poor financial choices and behavior. Financial therapy can teach you the discipline to overcome your self-sabotaging financial habits and make meaningful changes in your life.

When you continue to have self-limiting money scripts, your actions will always try to confirm those beliefs. It’s like a self-fulfilling prophecy.

You can identify your subconscious money beliefs and empower yourself to make better choices!

What are your thoughts on money scripts? Let us know in the comments!