Federal Tax Revenues: Where Does the Money Come From? 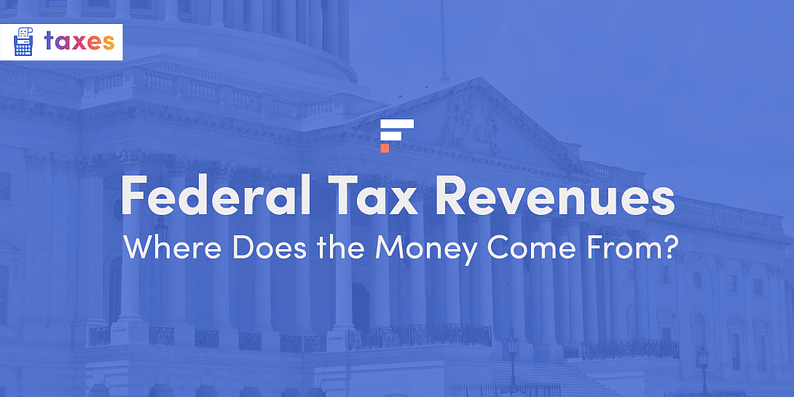 Over the course of 2019, the US government took in $3.5 trillion dollars in federal tax revenues. Have you ever wondered where that money comes from?

Let’s look at the most recent federal tax revenue reports, breaking them down by source and comparing them to historical data.

Figure 1: Sources of federal tax revenue in 2019 (in millions of dollars)

Let’s break those data down into percentages:

The tax-to-GDP ratio measures a nation’s tax revenue relative to the size of its economy (measured by gross domestic product). It is one indicator of how much of a country’s economy goes toward sustaining its government. Since World War II US federal tax revenues have averaged around 19.5% of the GDP, regardless of fluctuations in marginal tax rates. Most developed countries have a higher tax-to-GDP ratio than the US: the OECD average is 34.3%.

Individual income taxes are by far the largest source of federal revenue. They account for 49.59% of total federal tax revenues.

Federal income taxes are progressive: the more you earn, the larger the percentage of your income that you will pay in taxes. Depending on how much you earn you will fall into one of the seven tax brackets, ranging from 10% to 37%.

The corporate income tax is the third-largest source of federal revenue, after individual income taxes and payroll taxes. It accounts for 6.65% of total federal tax revenues.

The importance of the corporate income tax as a source of federal revenue has been steadily declining from the 1950s to the 1980s. It now averages less than 2% of GDP.

Figure 3: Federal Corporation and Individual Income Tax as a % of GDP

Payroll taxes are the second-largest source of income of the federal government, accounting for 35.89% of the total federal tax revenues.

Excise tax revenue as a percent of GDP has declined over time, as GDP has grown faster than average annual excise tax receipts.

Figure 5: Excise tax collection as a percent of GDP has declined over time.

The estate tax is a tax on assets that are transferred from deceased persons to their heirs after their death. These include assets such as cash, real estate, stocks, etc. The estate tax affects people who are able to pay the most and is considered the most progressive tax. The tax rate ranges from 18% to 40%.

Federal estate taxes are imposed only on relatively large estates. The level at which estate taxes are imposed changes from year to year. The biggest recent change occurred in 2018 when the Tax Cuts and Jobs Act of 2017 more than doubled the exempt amount to $11.18 million per taxpayer (from $5.49 million in 2017). Today roughly two out of 1000 estates are large enough to pay the estate tax.

Why Do We Pay Federal Taxes?

The Constitution grants the US Government the power to collect revenue by taxing its citizens.

Article I, Section 8, Clause 1 of the United States Constitution

Just as individuals earn wages for their work, the government taxes its citizens in order to provide services to them. These services include:

States and local governments also impose and collect their own taxes in order to pay for the services they provide to their citizens.

Taxes are inevitable. Every government in the world collects them. That doesn’t mean they’re popular. Taxes and tax rates often become political issues and may inspire a great deal of passionate argument. Understanding how taxes are collected and how the money is used can help us to bypass emotion and develop fact-based positions on tax-related issues.

Do you have any questions about federal tax revenues? Let us know in the comments section below!

The content on finmasters.com is for educational and informational purposes only and should not be construed as professional financial advice. Finmasters is not a financial institution and does not provide any financial products or services. We strive to provide up-to-date information but make no warranties regarding the accuracy of our information.
Copyright © 2021 FinMasters | Powered by VertiStudio
X